Using the Harry Potter term, this ‘rogue’s gallery’ picture set is taken from a property in the Greater London area.  Asked to simply provide a quotation to upgrade the existing boiler system to Honeywell Evohome zoned control, I stumbled upon this.

What we have here is a 50Kw Evinox condensing boiler, installed by a contractor on behalf of the previous owner around 12 years ago. 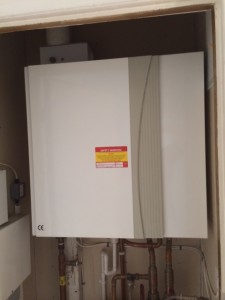 The current owner had concerns about the unusual flue termination and had arranged different contractors to carry out the annual boiler service over the last 8 years.  None had mentioned any problems with the external termination, including one of the manufacturer’s own staff.

As part of my quotation visit for Evohome, I wanted to see the boiler, and was shocked to see discoloured mastic wiped around the flue elbows, meaning that they had been leaking –  this was particularly worrying as the flue system passed directly through an adjacent bathroom. 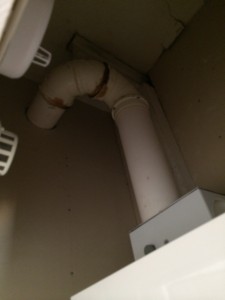 The flue outside was a real shocker.  The original installer had used a vertical balanced flue terminal and fitted it horizontally;  this meant it not only leaked condensate both onto the patio but back inside the air inlet.  Furthermore, the sheer unsupported weight of the terminal had necessitated a steel wire rope being attached to a eyebolt further up the wall to prevent it falling off the wall.

To round the job off, a plastic water hopper had been cantilevered off the wall to catch the condensate drips.  This had all been in place since the boiler was installed. 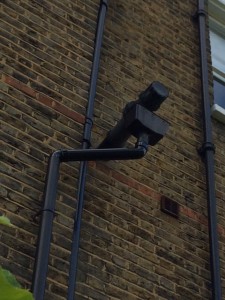 The steel wire support can just been seen above the flue.

Not surprisingly, when I advised the customer that this was dangerous and had to be immediately turned off from the gas supply, he was sceptical.  He argued that every other gas technician that had been to service the boiler had never mentioned it.  I pointed out that a thorough a flue inspection is a mandatory part of a service.

Sometimes it is hard to believe one Gas Safe technician where a number of other supposedly informed and qualified technicians have given the same installation a clean bill of health.   At the end of the day, they were extremely negligent and the innocent customer could have been affected.

Just to be sure of my actions, I rang the engineer helpline at Gas Safe Register to following morning (my quote visit was early evening) and they advised that the boiler was not safe to use because of the defects.

We haven’t formally asked permission to publish these photos, so I cannot identify the region of London they were taken.  The photos have been cropped so the property cannot be identified.

The potential customer for Evohome has advised us that the flue is currently being replaced with the correct parts.

In the meantime I might send the photo to the Gas Safe Register ‘Gas Installer’ magazine, as I think the best ones win a digital camera!

Excellent work , the workers were very efficient, considerate and tidy. They worked with the least disruption possible for an elderly lady. Any unexpected problem was dealt with safely and professionally. The finished heating is to a high standard. K.T. Kent

The job was very professionally undertaken on time and budget with no adverse issues raised. Customer satisfaction appeared to be a high priority.

Truly excellent, as much technically as aesthetic: clean, prompt, going well beyond expectations.

A small to medium sized company capable of installing & maintaining a highly technical modernisation of our heating & h/w systems. The planning, execution & result was truly ‘excellent’.

We needed a replacement boiler & Simon talked us through the options, which manufacturer & what size to go for & saw through the installation, not leaving until he was satisfied that all was in order. All in all very, competent and professional.

Not the cheapest but very knowledgeable which gave me confidence that the job would be well done and correctly done. I was not disappointed.

Good standard of work with an ongoing commitment to customer satisfaction

This firm installed a 12 zone Honeywell Evohome central heating and hot water control system for us in October 2014. The quotation was clear and detailed, and the price reasonable. The installation work was personally overseen by the boss, Simon, who also set the rather complex (but powerful) wireless control system to work and gave clear advice on how to get the best from it. He had in-depth knowledge and experience of the control system that is probably second to none. The firm also installed and connected to our boiler a plinth fan heater nicely hidden under a kitchen cupboard Read more…

Employed this trader many times

Started and finished on time. Workmanship as good as ever. prices reasonable.

Great technical solution to the tricky replacement of a 1980’s warm air unit. Starting with a clear and comprehensive quotation. Careful and tidy installation with minimal disruption. Excellent communication throughout the work.

HWCH installed our boiler a few years ago and have looked after it ever since so I was happy to leave them in the house unaccompanied. We came home to find the installation complete and no mess or trace they had been.

My son recommended this firm as I was very apprehensive about having a new boiler. Mr Davies was very clean and helpful and explained everything. The two men who did must of the work were efficient, polite , clean and considerate to me . As far as I can tell I have an efficient job carried out in one long day which helped me.

We have used the company for many years for 2 rental properties & our family home. We cannot fault them.

HW and CH knowledgeable, friendly and efficient company we would certainly recommend them.

I have known HW & CH for several years. They installed two large boilers in a church and hall and maintain them annually. I gave recently used them at my home where they did a very clean, neat and efficient job. Supplied excellent product and were very professional.

Simon of HWCH takes his job very seriously but is a pleasure to deal with. He assessed our (complicated) situation carefully, recommended the right solution and carried it out promptly and efficiently.

An intimate knowledge of a rather complex Honeywell Evohome heating control product, combined with an excellent installation crew on the day resulted in a very satisfactory installation. Some tricky rerouting of underfloor pipework was accomplished without fuss, mess or extra charge, highly recommended.

Very impressed with work rate and efficiency. Would have no hesitation in recommending them.