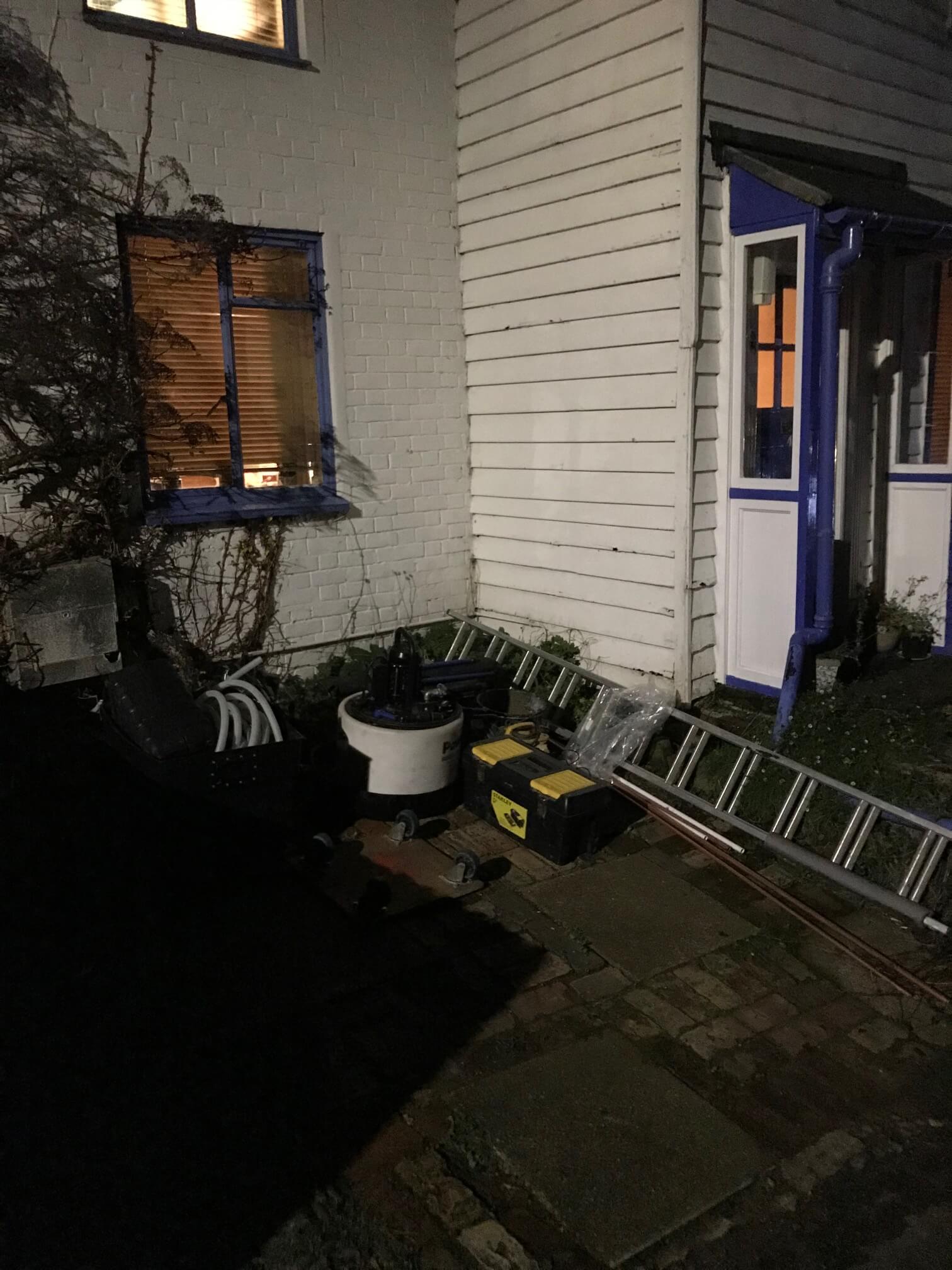 This one is an interesting story, in essence our customer needed a new boiler, their existing one was leaking badly, but contractually it is more complex.

They chose one of the new breed of internet based suppliers, where a quote is given after filling out some internet questions with the help of pictures and tick boxes.  If this is acceptable, a deposit is taken, the job is booked and you can (apparently) sit back in the comfort of knowing all is well.

The internet based company they chose had all the right credentials, including peer reviews, and blobs and stars from various Trader Recommendation websites, and Gas Safe Registration.

The reality was that some, but not all of the parts were delivered, and the installation technician never showed up.

When we were contacted, after which time the part delivery had been languishing on site for a month, we did things the old fashioned way.  This meant I had to get into my van and have a look, then return to base, write a quote and email it.

To be honest, I would very much like to have a website that could do all this for me.  I’ve had a couple of companies approach us this year who say they could set up just such an automated system for us.  I could sit in the office, pay for Google advertising, and watch the jobs roll in.  Trouble is, these app designers are not heating engineers, tradesmen or surveyors.  I know that accepting jobs sight unseen would lead to disasters occurring daily.

So, to cut a long story short, we came, surveyed, priced, and completed the job  – a nice Worcester Bosch 25i Boiler with a 10yr manufacturer warranty.  We powerflushed, magnacleansed.  We had a 10 mile journey home. 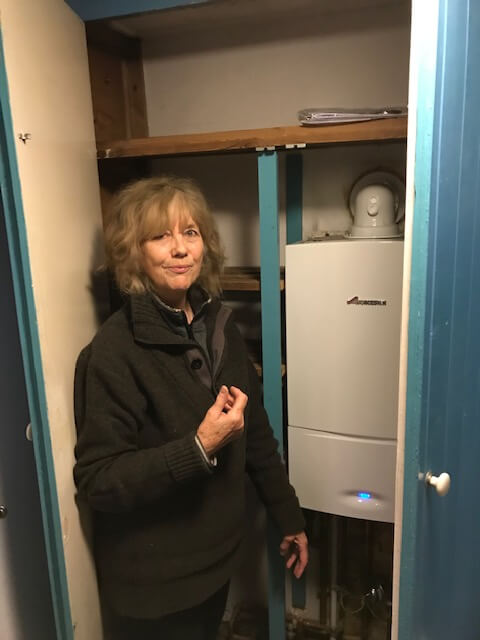 Our customer now has heating and hot water

If the installer had turned up from the internet based firm, he would have typically been a subcontractor, who would have left his house in the North East of UK at 4am, driven for 4hrs across motorways to Sevenoaks, and been in a rush to get home again.

His demeanour would have not been helped by the fact that he would be paid a pittance by comparison to my team.

Furthermore, I have heard from a number of customers that many internet boiler fitting companies are not at all interested in the annual servicing of their boilers further down the line.  There simply isn’t the margins there to arrange it via third parties.

So there you have it.  If you want to rent a film, or buy a book or a TV, the internet may be worth using.  If you want someone to specify the right boiler, do all the right checks, spend the time on system preparation, and follow it up with aftersales, best deal with a bricks and mortar firm nearby.

We don’t earn our living from web fulfillment;  we earn it working in residential and commercial premises, carrying out design and installation.

A footnote to this story is that the internet nationwide boiler installation specialist concerned (I’m afraid I can’t name them due to fear of litigation) are being very difficult about returning the customer advance payment, and have also broken many promises to collect their equipment from site.

Hopefully by the time you read this, these outstanding issues will have been resolved, as we found our customer very reasonable and pleasant to deal with.

Excellent work , the workers were very efficient, considerate and tidy. They worked with the least disruption possible for an elderly lady. Any unexpected problem was dealt with safely and professionally. The finished heating is to a high standard. K.T. Kent

The job was very professionally undertaken on time and budget with no adverse issues raised. Customer satisfaction appeared to be a high priority.

Truly excellent, as much technically as aesthetic: clean, prompt, going well beyond expectations.

A small to medium sized company capable of installing & maintaining a highly technical modernisation of our heating & h/w systems. The planning, execution & result was truly ‘excellent’.

We needed a replacement boiler & Simon talked us through the options, which manufacturer & what size to go for & saw through the installation, not leaving until he was satisfied that all was in order. All in all very, competent and professional.

Not the cheapest but very knowledgeable which gave me confidence that the job would be well done and correctly done. I was not disappointed.

Good standard of work with an ongoing commitment to customer satisfaction

This firm installed a 12 zone Honeywell Evohome central heating and hot water control system for us in October 2014. The quotation was clear and detailed, and the price reasonable. The installation work was personally overseen by the boss, Simon, who also set the rather complex (but powerful) wireless control system to work and gave clear advice on how to get the best from it. He had in-depth knowledge and experience of the control system that is probably second to none. The firm also installed and connected to our boiler a plinth fan heater nicely hidden under a kitchen cupboard Read more…

Employed this trader many times

Started and finished on time. Workmanship as good as ever. prices reasonable.

Great technical solution to the tricky replacement of a 1980’s warm air unit. Starting with a clear and comprehensive quotation. Careful and tidy installation with minimal disruption. Excellent communication throughout the work.

HWCH installed our boiler a few years ago and have looked after it ever since so I was happy to leave them in the house unaccompanied. We came home to find the installation complete and no mess or trace they had been.

My son recommended this firm as I was very apprehensive about having a new boiler. Mr Davies was very clean and helpful and explained everything. The two men who did must of the work were efficient, polite , clean and considerate to me . As far as I can tell I have an efficient job carried out in one long day which helped me.

We have used the company for many years for 2 rental properties & our family home. We cannot fault them.

HW and CH knowledgeable, friendly and efficient company we would certainly recommend them.

I have known HW & CH for several years. They installed two large boilers in a church and hall and maintain them annually. I gave recently used them at my home where they did a very clean, neat and efficient job. Supplied excellent product and were very professional.

Simon of HWCH takes his job very seriously but is a pleasure to deal with. He assessed our (complicated) situation carefully, recommended the right solution and carried it out promptly and efficiently.

An intimate knowledge of a rather complex Honeywell Evohome heating control product, combined with an excellent installation crew on the day resulted in a very satisfactory installation. Some tricky rerouting of underfloor pipework was accomplished without fuss, mess or extra charge, highly recommended.

Very impressed with work rate and efficiency. Would have no hesitation in recommending them.